How did you come to be cast as Trish?

I bumped into Tony Holland and Julia Smith, the producer, and I said I would like to change my career - I was doing cabaret all over the coast and I was already 48 and thought it was time to do something else. I said to Tony, ‘Can I not change my career now and become a researcher on Eldorado?’ He said ‘No, because I’ve written you in it!’ He said, ‘We’re going to call you Trish Valentine, and you mustn’t tell anyone about it’, which as everybody knows I never did (!)

I said ‘Tony, does it have to be Trish? I’d really like to be Rose’, and he said I couldn’t be Rose because there was already a Rose written into EastEnders. She had never appeared at the time but she was mentioned. And bugger me, 20 years on who do I play? Rose! Dot Cotton’s tarty, geriatric sister!

You were quoted at the time as saying your only problem with doing sexy scenes with Dieter was there weren’t enough rehearsals! 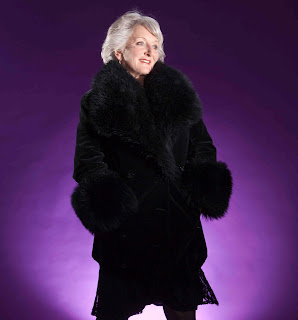 I said that because it’s the sort of thing that Trish would say. She is closely based on me, except for my personal life! When I said it, it didn’t occur to me that people would believe it, but I do generally play rampant heterosexuals of all ages!

On rehearsals, I don’t remember ever doing a rehearsal, only a read-through and a technical run. Also the same in EastEnders. I’ve never known it in soaps. They might do it for big, important scenes, but I had a few important scenes and there was no rehearsal.

Did you feel the criticism of the younger actors was unjustified if they didn’t get a chance to practice?

I think it wasn’t their fault, it was the casting. Julia had this idea of getting real type of people, but real people can’t act, necessarily. It’s not a documentary. I think she felt that because it was a real place, she would get real people. I don’t know what was behind it but she wanted it very real.

The problem wasn’t the young actors - it wasn’t their fault, they were cast above their level. Kathy Pitkin, who played Fizz, was a sweetheart. She was having lessons and doing quite well while she was doing Eldorado, but some of the others were under the impression they were marvellous just to have got the job! But they weren’t bad people, they were fine.

Did you feel the scripts reflected the ex-pat lifestyle? Did the writers ever come out to Spain?

The writers did come out to see us, John Maynard came out, and Gilly Fraser and some of the female writers. Over the year there were so many stories. All of the extras were my neighbours, they could have all told fantastic stories! And everything that happens over in England happens here.

I had a meeting with the writers - Tony Jordan, Tony McHale and others - and they wrote for me absolutely brilliantly. They wrote for Trish, and it was right. It’s the persona I use doing what I do, and they also got the person behind that. And I think a lot of that was because they came to see me work. At one pub performance, I had just broken my foot, and then that got written into the script!

When Dieter left after 6 months, they said they were going to keep me on. I said, ‘Thank God for that!’ And I asked them, ‘Do I have to have another young boy?’ I was really worried I would get a lot of write-ups about this worn-out old tart with this pubescent boy! I said, ‘Can you not get me a Mr Big, someone from Trish’s past?’

Luckily they got Derek Martin who was a joy to work with. It was so right and made the soft side of Trish come forward, and all her back-story. If they bring it back, he’ll have to come back and I’ll have had a secret love-child that he never knew about because the show didn’t run long enough for me to tell him!

The BBC have been very good to me lately, but I feel that Alan Yentob was entirely the wrong person to be in charge. He’s an artsy-fartsy person, who prefers to be in front of the cameras by the look of it, doing intellectual programmes – which I do enjoy - but what has a man like that got to do with soap? I worked with David Liddiment once (former ITV director of programmes and Coronation Street executive producer), who was an expert on soaps. And I’m a bit of an expert on them too, because I really like them.

You look back on it all as more positive than negative?

Oh totally, I think it was just a waste. They made a lot of mistakes and there were 3 different companies involved for no particular reason. John Dark (executive producer) told me he was disappointed the show wasn’t more glamorous, more ‘Marbella’. I think that would have been a good contrast, and show it wasn’t just the Brits who had brought England with them, like Campbell Morrison and Patty Brake’s characters who moved their house to the sunshine.

If the show had run longer they could have done more, and there are all sorts of characters they could have found, who I see here in Spain. If they had had more time and more knowledge of what goes on here, they could have developed these characters who have an interesting past. With other soaps, like Coronation Street, you find out about the characters’ backgrounds and they’re in it for years… Eldorado never had a chance in 1 year.

Do you feel there has been more interest in the show in the last couple of years?

Yes, I’ve noticed that. People have come up to me and said, ‘It’s you, you’re Trish!’ When they ask what I’ve been doing and I say, ‘I’ve just been in EastEnders’, they say, ‘Oh yes, I heard about that!’ But they know me for Trish, and I thought, ‘That’s Eldorado for you!’ But the BBC won’t give it a go for whatever reason, perhaps because they consider it failed. No one’s ever told me.

Have you kept in touch with anyone from Eldorado?

When I was doing some work in the UK, I was in touch with Leslee Udwin (Joy Slater), I loved working with her. It was a lovely relationship we had, and nobody questioned it – which was odd, because she was playing a middle-class, posh woman of status, and Trish was as common as - whatever. It was wonderful the way they wrote that. The writers, like Tony Jordan and Tony McHale, were what I call old-school, they got into the nitty-gritty of the characters. With writers like that, if they had kept with the same people, in another year Eldorado would have been fine.
Email ThisBlogThis!Share to TwitterShare to FacebookShare to Pinterest
Labels: BBC Eldorado, Eldorado, Polly Perkins, Trish Valentine