Patch Connolly played Los Barcos’ Irish handyman, Snowy White. On the surface a rather eccentric, happy-go-lucky type, always on hand to paint your wall or fix your fridge, Snowy hid a tragic past which led him to leave Ireland and start a new life in Spain. While always one to spread the local gossip, he didn’t appreciate others prying into his own business. 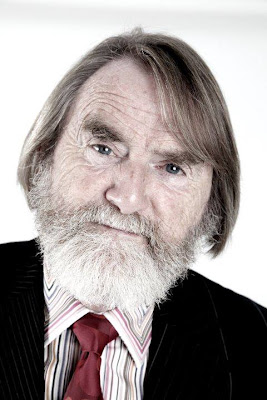 How did your casting as Snowy come about?

Being cast as Snowy White led to one of the most remarkable and eventful engagements after 22 years of theatre, television, films and light entertainment. I had just completed a world tour of The Tempest for the Oxford Stage Company and was working at the Liverpool Playhouse on Once a Catholic when Julia Smith and Tony Holland requested me, through my agent, the late Sheridan Fitzgerald, to audition. I travelled down on the early train, met them at midday and by the time I got back to Liverpool for the evening performance they had rang to say I had been successful.

The audition comprised a lengthy informal chat and the character Snowy appeared to be right up my street – slightly eccentric, a very un-handyman with a good ear for gossip. Hindsight is a wonderful thing, and if playing the character now I would approach it very differently, using my own personality and voice, with a shifty ingredient of annoyance and frustration.

How did you feel about the way the BBC was handling the project?

Because the original concept of Eldorado was moved from 9, to 8 and eventually a 7 o’clock showing, it lost most of its impetus in original gutsy storylines. Consequently, the new watered-down scripts were arriving the night before shooting and still had to be performed the next day. And, unlike a ‘soap’ produced in England, these new scripts had to be shot in 35 degrees of heat. On top of this, someone higher up on the executive side had decided to bring the programme forward by 6 months, even though the set was not completed and no essential pilots were planned.

Of course, as the weeks and months passed characters did develop, including Snowy, but by then, the hierarchy had decided it was not to their liking. There were justifiable complaints about the £10 million lost in setting up the project - small fry compared to the recent losses of £100 million on some unsuccessful computer program for the BBC.

When the late Julia Smith, the producer and creator, with the experience of Angels and EastEnders behind her, was abruptly removed after 6 weeks, another strange executive decision, many of the actors were deeply upset and the natural development of Eldorado’s long-term future lay in tatters. The parasites of the press had a field day but everyone, even those actors who knew their days were numbered, carried on working in the most professional manner.

Improvements were implemented, storylines tightened and sound difficulties resolved – even some of the buildings were now completed. The working day was reduced from 15 hours to 10 and we all had a little more time to absorb the new scripts and even relax on the Sundays by the swimming pool.

How was the experience of living and working in Spain?

I personally loved working in the warmth of the sun, visiting places of interest on my day off such as The Alhambra Palace in Granada and delights of Seville. My family joined me and worked as extras in many of the episodes, enjoying a strangely extended holiday, mixing with the other actors and their families.

All the directors and crew were extremely patient, in very difficult circumstances. Among them, the inexperienced actors, the mixture of accents, the incomplete buildings, sound problems, the 25-mile journeys between locations and the unseen pressures from executives and press. Although I had worked before in television these particular directors were most understanding and I have much to thank them for, especially Ian White, Nick Prosser and Henry Foster.

Jesse Birdsall (Marcus Tandy), Faith Kent (Olive King), Patricia Brake (Gwen Lockhead), Bill Lucas (Stanley Webb), Kim Romer (Per Svensson) and Darren Newton (Gavin Hindle) were consummate professionals and a joy to work with and ‘Trish’ kept us all in high spirits in those moments of madness and mayhem.

In 11 months I had learnt so much about the technique of television, what goes on behind the camera, the editing, scripting etc, but most of all about actors themselves, their egos, temperaments, ambitions and lifestyles.

The dear departed Verity Lambert fought so hard for us all and I did think the programme would survive, but a month after my departure it all ended in tears. I was personally sad for those left behind to face the final episodes.


What have you been up to since Eldorado?

Life was a little difficult on my return to England but worked slowly picked up and I was soon back on stage in The Cherry Orchard. This eventually led to films including Edgar Wright’s cult masterpiece, Shaun of the Dead – playing a tramp, eating pigeons!

I wonder what Snowy would have thought of that or even my roles in Sketchy, a delightful Irish television sketch show, playing an undertaker, randy sailor and gentleman of crime? Other recent roles have included an old farmer, John Lester, in a film called The Race and more recently, a gravedigger, in the touching Oscar-winning short film, The Shore, directed by Terry George.

How would you feel about Eldorado returning? Would you want to be involved?

There are many untold gritty stories still awaiting on the Costa del Sol – crime, murder, madness, love, passion, distress and the Eurozone to name but a few. Perhaps, beginning with a smaller cast, a return of Eldorado is possible. The Norwegians appear to have cracked a splendid format which, with a little British adjustment, could be what Julia Smith and Verity Lambert’s vision would have been. And some humour – what our current ‘soaps’ sadly lack is some real humour.

Perhaps Snowy, on returning after a long journey from Ireland, and in a deeply drunken state, finds a stiffened body which resembles the inimitable Bunny. Without hesitation, Snowy proceeds to organise ‘The Wake to end all Wakes!’ inviting a few of the old characters along as well some new ones … and … Bunny turns up … for his own wake! This is just to let you know I am available now!
Email ThisBlogThis!Share to TwitterShare to FacebookShare to Pinterest
Labels: BBC Eldorado, Eldorado, Patch Connolly, Snowy White